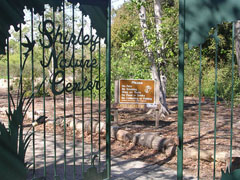 Opened in 1974, the Shipley Nature Center is an 18-acre fenced natural area within Huntington Beach Central Park. Named after former Mayor Donald D. Shipley, the center is owned by the City of Huntington Beach. The Nature Center includes 4,000 feet of trails that meander through several habitats, including oak woodlands, Torrey pines, meadows, and Blackbird Pond, a natural freshwater wetland with mature willows, and sycamores.


A home solar panel system consists of several solar panels, an inverter, a battery, a charge regulator, wiring, and support materials. Sunlight is absorbed by the solar panels and is converted to electricity by the installed system. The battery stores electricity that can be used at a later time, like cloudy days or during the evening.  Learn more about solar.