The Marine Safety Division provides public safety to the City's Main Beach and Sunset Beach. Lifeguards patrol the 3.5 miles of Main Beach shoreline from Beach Boulevard north to Sea Point Avenue dawn to dusk, 365 days a year. Lifeguard patrol in Sunset Beach is maintained from 10 a.m. until sunset. Daily staffing levels vary from five Marine Safety Officers in October through April, to as many as 65 lifeguards in the summer. During the fall and spring seasons, staffing levels are vary- based on attendance and weather conditions. Shifts are staggered that no less than two lifeguards are on duty during the early morning and late evening hours. 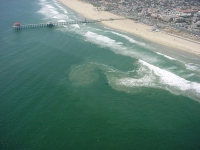 Marine Safety staff are highly skilled experts in aquatic rescue and incident command. They are trained and equipped to respond to a variety of rescue incidents within and outside of their primary jurisdiction. This training and equipment make Marine Safety Specialized Rescue Teams a valuable resource for the city, and to other agencies requesting mutual aid assistance. 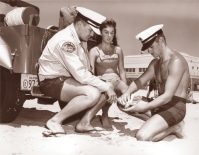 Huntington Beach has grown from a sleepy beach town to a premier resort destination. The Marine Safety Operation has grown to continue to keep the surf safe in Surf City, and remains a leading agency as well as an international lifesaving model.