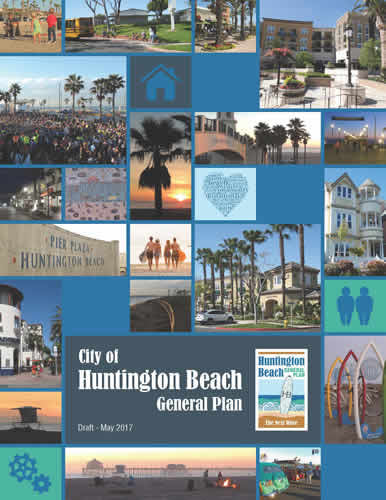 A General Plan is a local government's long-term blueprint for the community's vision of future growth. Each city and county in California is required to adopt a general plan and update the plan at regular intervals. Sections 65300 - 65404 and 65590 - 65590.1 of the California Government Code establish the requirements for the minimum contents of the general plan and rules for adoption and subsequent amendments. Together, these portions of state law and General Plan Guidelines that are prepared and maintained by the California Governor's Office of Planning and Research establish the legal framework for the City of Huntington Beach General Plan Update.

The General Plan Update is comprised of the following six elements: Land Use, Circulation, Environmental Resources and Conservation, Natural and Environmental Hazards, Noise, and Infrastructure and Public Services. Each Element of the General Plan Update includes goals, policies, and implementation programs that create a roadmap for new housing and job growth, provide guidance for decision makers on allocating resources, and describe the utilization, management, and conservation of natural resources, public services, and infrastructure. The Historic and Cultural Resources, Housing, and Coastal Elements are not a part of the General Plan Update.


Solar power is noise pollution free. It has no moving parts, and does not require any additional fuel, other than sunlight, to produce power.  Learn more about solar.