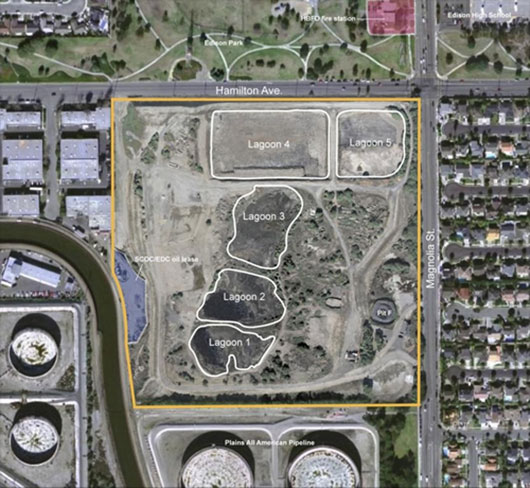 The Ascon Landfill, located at the Southwest Corner of Magnolia and Hamilton, operated as a landfill from 1938 to 1984. Much of the waste came from oil drilling, especially in the early years. A group of private companies that formerly owned the site are paying for clean-up activities. An Interim Removal Measure of oily materials from two interior waste lagoons was completed in 2011.

Current work now focuses on the public process and environmental evaluation for the final remedy to remediate the site. DTSC determined that chemicals located onsite, as a result of past operations at the site are above DTSC's protective standards. Thus, DTSC requires development and implementation of an overall cleanup plan (RAP) for the entire site to ensure longterm public safety.

A Notice of Preparation (NOP) is currently available for public review and comment. The purpose of the NOP is to solicit guidance from agencies and stakeholders for the scope and content of the environmental information to be included in the draft Environmental Impact Report (EIR). The Department of Toxic Substances Control (DTSC) is the lead regulatory agency for the approval of a Remedial Action Plan (RAP) for the Ascon Landfill site. Pursuant to the
California Environmental Quality Act (CEQA), DTSC determined an EIR should be prepared in order to solicit public input, evaluate environmental impacts and analyze alternatives.

Two Upcoming Public Scoping Meetings & How You Can Participate: