The Huntington Beach Fire Department was formed in 1909, the same year as the City's incorporation. On March 15, 1909, a group of 20 residents, realizing that the increasing number of losses of properties involved in fire required action, met to form the City's first volunteer department. John Philip was selected as the first Fire Chief and on April 15, 1909 the City Council officially recognized the department. Shortly thereafter the City's first "Fireman's Ball" was held to raise money for the new department. After the fundraising was complete, Chief Philip appeared before the City Council to obtain approval for the purchase of a large fire bell, hose cart with 600 feet of two-inch hose, nozzle and hydrant wrench. Not long after the purchase of this equipment, the department also obtained helmets, coats, boots and leather buckets.

A fire station and meeting place was designated in a livery stable located at the northeast corner of 3rd and Orange Streets. For the use of the front portion of the stable the City paid $8 per month. Later this location burned down and the Fire Department was relocated to the southwest corner of Main and Walnut Streets.

No thought was given to the purchase of a fire engine. Volunteer Firefighters were summoned by a large fire bell mounted on a 20 foot tower in the center of town and the hose cart was pulled to fire scenes by a horse and buggy provided by the first volunteer to report to the station. Although fire volunteers provided their services free of charge, a $2 remuneration was given to the person providing the horse and buggy.

Horses were galloped full speed on emergency responses which, at times, caused serious accidents. The only Huntington Beach Firefighter killed in the line of duty died in such an accident. Firefighter Tom Anderson was riding on the hose cart when it took a corner too fast and overturned. Firefighter Anderson died later due to an injury to his head caused from falling off of the hose cart. 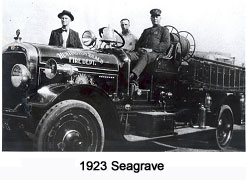 In the 1920's, with the City's rapid growth due to booming oil production, the need to replace Fire Department equipment became apparent and the voters approved a bond issue for the purchase of new apparatus. Following this, a 1923 Seagrave fire engine was purchased for $14,500. It had a 750 gallon-per-minute capacity and carried 1,600 feet of two and one-half inch hose, in addition to a 20-gallon chemical tank with 100 feet of one-inch hose.

In 1922 the City appointed its first full-time Fire Department employee, Jack K. Sergeant, who was hired as a Driver and Assistant Chief. In 1927 he was appointed Fire Chief. At that time a revised pay schedule was implemented that provided volunteers $5 per fire for the first three hours and $1 for each hour thereafter. They also collected $2 for each two-hour drill, of which there were three each month.

A second fire engine was added in 1927, a Seagrave with a six-cylinder engine and four stage, 400 gallon-per-minute pump. Also during that year a large oil fire occurred on the Alberg Gasoline Plant property at 12th and Olive Streets. It destroyed an entire city block and greatly taxed the resources of the Fire Department. 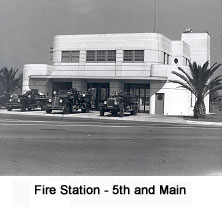 By 1933 the Department had grown to include Chief Sergeant and five engineers, assisted by 15 volunteers. During that same year a large earthquake occurred, which destroyed City Hall and the fire station.

In 1937 a new fire engine was purchased, a 1,000 gallon-per-minute Seagrave with a 12-cylinder engine. In 1939 a new fire station was completed, located in the 500 block of 5th Street. This station, valued at $20,000, only cost $7,500 to build due to assistance provided by the federal government's Works Progress Administration (WPA).

Fire Chief Sergeant retired in 1950 and Delbert G. ("Bud") Higgins was appointed as his successor. Chief Higgins applied himself to building the department to the capabilities required to match the needs of the growing city. When he was appointed Fire Chief there were seven paid Firefighters in the City, along with nine volunteers. He made many significant changes, including increasing staffing, implementing a three platoon, 24-hour shift work week, obtaining a radio license for the assignment of radio frequencies, adding additional equipment and tools, and adding additional apparatus. The City's water system was also upgraded during this period and a large pumper/tanker was purchased in 1955. It included a 1,000 gallon-per-minute pump and a 2,500-gallon tank. Chief Higgins was also very involved in the preparation of the county's mutual aid plan, development of closed cab fire engines, and the development of a comprehensive fire protection plan for the City.

Chief Higgins successor, Raymond C. Picard, was appointed in September 1967 and served as Fire Chief until December 1990. During this time the City of Huntington Beach experienced tremendous growth, going from a population of 11,500 in 1960 to 181,500 in 1990. Along with this population and housing explosion came the need for expansion of the City's fire services and development of its emergency services capabilities. Under Chief Picard's leadership, the City built two new fire stations, bought new equipment and instituted a records management system. In the late 1960's the fire prevention inspection program was initiated, which resulted in a reduction in the number of fires. Also at that time the use of volunteers on fire engines and trucks was discontinued and paid firefighters were added to the Department.

In addition, major contributions under the direction of Chief Picard included the enhancement of the training and education of firefighters, the development of the Joint Powers Authority agreement between Seal Beach, Fountain Valley, Westminster and Huntington Beach, which provided for centralized communication and integrated response among the cities, and the installation of the new Computer Aided Dispatch (CAD) system, which was one of the first such systems in the United States. These improvements are still being used today throughout Orange County and have resulted in safer, more cost effective responses. The Department's emergency medical responses greatly increased during this time from 25% of emergency responses to 75%. Chief Picard was also instrumental in the development of the Automatic Aid system and in 1990 implemented the "FireMed" membership program.

Into the Twenty First Century - 1991 to the Present

Department's emergency medical service delivery system. These included the implementation of a Fire Department ambulance program and further enhancement of the "FireMed" membership program. Together these programs provide significant funding for the Fire Department. Also during this time all of the Department's engine companies were upgraded to Advance Life Support capabilities with four personnel each and the use of paramedic vans was discontinued. 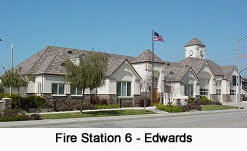 In 2000, the City's eighth fire station was opened on Edwards Street, south of Ellis Avenue. The funding for the station was provided by the developer of the Sea Cliff Homes Project, at a total cost of $3.4 million. This station is home to a paramedic fire engine and the Department's hazardous materials response unit. Lastly, following the tragic events of September 11, 2001, the Department began to place a greater emphasis on developing an integrated response to chemical, biological, radiological, nuclear and explosive (CBRNE) events.

Duane Olson served as Fire Chief from January 2003 until his retirement in December 2009. During that period an emphasis was placed on stabilizing staffing needs and upgrading the

Department’s apparatus fleet and fire stations. There was also a continued focus on developing a response to Chemical, Biological, Radioactive and Nuclear Events (CBRNE). Many of the changes in the department were made possible through advances in obtaining grant funding.  Lastly, in 2009, along with the City of Huntington Beach, the Fire Department celebrated its centennial, and was able to get all but eight members of the department in the picture with the huge assistance of neighboring city agencies who covered our stations for a short time during this historic event.

Fire Chief Patrick McIntosh was appointed in January 2010, and served until his retirement in November 2015. In 2010, the Department's Urban Search and Rescue (US&R) Team was recognized by the State of California Office of Emergency Services and certified by the State as a Medium Rescue, qualifying fire department personnel to respond to state-wide disasters. The Team continued to upgrade its equipment and training and was recognized as a Type 1 Heavy Rescue Unit in 2015.  An awards program recognizing and decorating fire personnel, whose actions exemplify the spirit of the fire service, was implemented in 2011.  The Marine Safety Division was merged into the Fire Department in 2013 and at that time they also assumed responsibility for providing lifeguard services for Sunset Beach. A fifth 24-hour fire department ambulance was placed into service in 2013, as well.

In 2014, the Department implemented a number of technology upgrades, including electronic patient care reporting and an Automatic Vehicle Location (AVL) system for tracking and deploying resources. At that time, the manual map book system used by emergency response units was replaced with an automated system which uses iPads for more efficient responses. The Department also added a State of California Governor's Office of Emergency Services fire engine. This engine provides an additional resource for responding as part of the state-wide mutual aid system and adds additional emergency response capability for the City of Huntington Beach.  Finally, in 2014 the Huntington Beach Fire Department was awarded a Class 1 Public Protection Classification rating by the Insurance Services Office (ISO).  ISO independently evaluates municipal fire protection efforts in communities throughout the United States.  The Class 1 rating is the highest possible rating that can be given to a fire department and few departments have this ranking.

David A. Segura was appointed as Fire Chief in April 2016 and served until his retirement in February 2020. After assuming leadership of the Department, he placed an emphasis on long-term planning and projecting the

future needs of the organization. This included preparing a succession plan, conducting a standards of cover evaluation and filling numerous critical positions in the Department in response to a large number of retirements. The Department also increased its outreach to the community. Through the Central Net Operations Joint Powers Authority, regional training programs were improved. Initiatives to enhance firefighter physical and behavioral health were also implemented, including cancer screening and prevention, peer support and counseling services.  During this period the Department also provided additional fire and marine safety emergency response capabilities for significant City events (Surf City Marathon, Fourth of July, U.S. Open of Surfing, Great Pacific Air Show, etc.) and upgraded state-wide responses provided under the California Master Mutual Aid Agreement. As part of this agreement, many strike team deployments and overhead positions were provided to regional wildfires and other large-scale emergencies throughout the state.

Our new Fire Chief, Scott M. Haberle, began his career with the Huntington Beach Fire Department on February 10, 2020.  He brings over 27 years of experience to the department, most recently as the Monterey Park Fire Chief.  Chief Haberle now leads one of the premier Fire Department agencies in the country with nearly 200 full-time personnel and 150 seasonal lifeguards and an annual operating budget of approximately $50 million.