El Nino in California and Nevada

How to Prepare for the Flood Brochure

El Nino in California and Nevada

A flood occurs any time a body of water rises to cover what is usually dry land. Floods have many causes, including heavy rains, spring snowmelt, tsunamis, hurricanes, coastal storms, and dam or levee failure. When flooding occurs, affected areas may sustain damage to structures and personal property, as well as severe damage to the environment in the form of soil erosion and deforestation and damage to utilities and transportation systems. 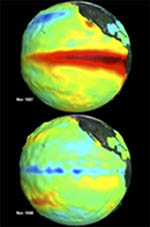 El Niño is a warming of the central to eastern tropical Pacific that occurs every two to seven years, on average. The term also commonly refers to the atmospheric rearrangements that occur with the oceanic warming. During an El Niño event, sea surface temperatures across a watery expanse often as large as the United States can warm by 1-3°F or more for a period of from a few months to a year or two.

La Niña, the counterpart to El Niño, is a cooling of the waters across the same region. As with El Niño, the term La Niña typically is used to refer to the associated atmospheric as well as oceanic patterns. It often lasts longer than El Niño, sometimes persisting or recurring for two or more years. El Niño and La Niña are normally accompanied by variations in the tropical Pacific Ocean's Walker Circulation (see diagram), as well as a vast see-saw in atmospheric pressure-the Southern Oscillation-that modifies the Walker pattern. The term El Niño-Southern Oscillation, or ENSO, refers to the combination of atmospheric and oceanic effects associated with both El Niño and La Niña. 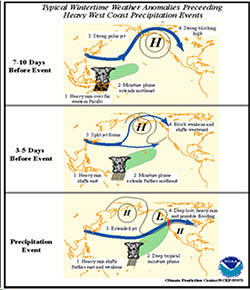 National Weather Service prediction models and they do not take into consideration other factors such as Madden-Julian Oscillation (MJO), which is more likely to take place in ENSO neutral years. Recent breakthroughs in the understanding of this anomaly have allowed forecasters the ability to predict these types of weather patterns five to seven days in advance. MJO is an anomaly that occurs when weather systems in the western Indian Ocean move through the South Pacific. The interaction of this system with Pacific storm systems can result in an enhancement of rainfall on the West Coast. This type of weather pattern can cause dramatic changes in forecasting. This is what was seen in the spring of 2004, which caused the second most rainfall in recorded Southern California history. If we do experience weather related to MJO, we could expect a strong chance of debris flows in the 2007/2008 burn areas and threat of severe flooding in low lying areas

Huntington Beach weather conditions are consistent with coastal southern California, which is semi-arid. The threat of severe winter storms is greatest during December through March. The southwest facing beach of Huntington Beach can experience surf and wave impacts from both winter and summer storms. Heavy rains combined with high tide and large surf creates an increased potential for flooding. High tides may prevent flow from the Santa Ana River into the Pacific Ocean resulting in flooding in the south end of Huntington Beach.

The flood hazards that potentially threaten Huntington Beach include: