"…everyone should be treated with courtesy and respect, regardless of their racial background, their nation of origin, the religion they practice, their sexual orientation, gender or disability status. It is the right of all citizens to pursue their daily lives with the knowledge that they will not be physically harmed or verbally abused."

Declaration of Policy About Human Dignity, City of Huntington Beach, 1996

The Huntington Beach Cultural Cinema Showcase is a celebration of various cultures locally and from around the world! Our next showcase cycle seeks films and photographs celebrating Asian-Pacific and Hispanic-Latinx heritage! We encourage you to submit your short film or photographs for consideration. For more information, click on the link to submit. 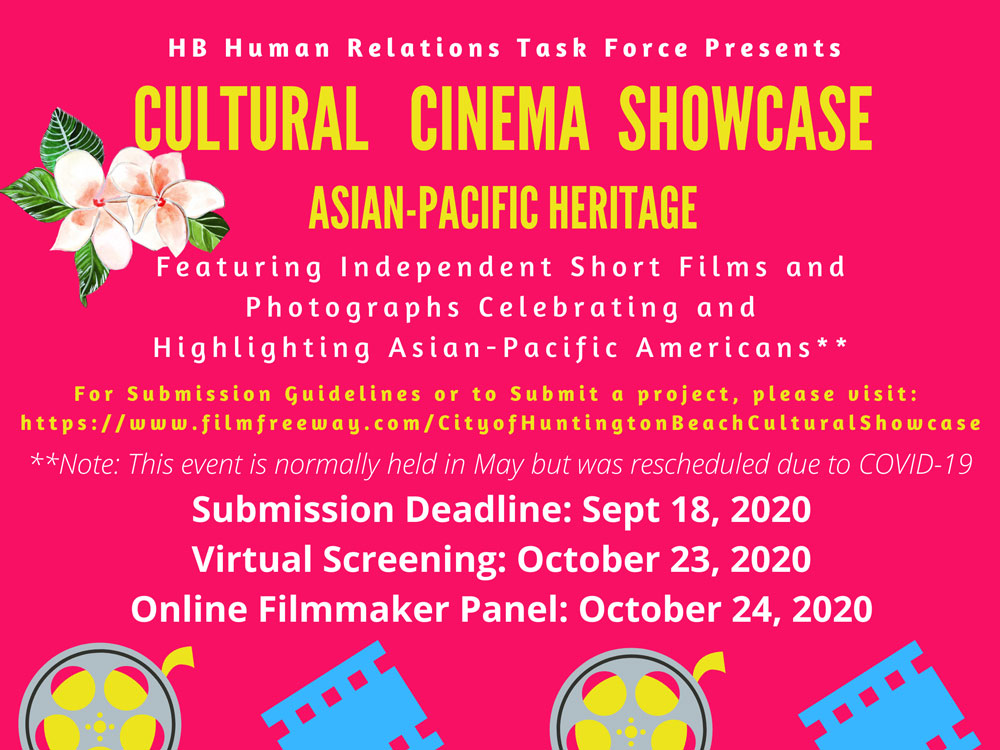 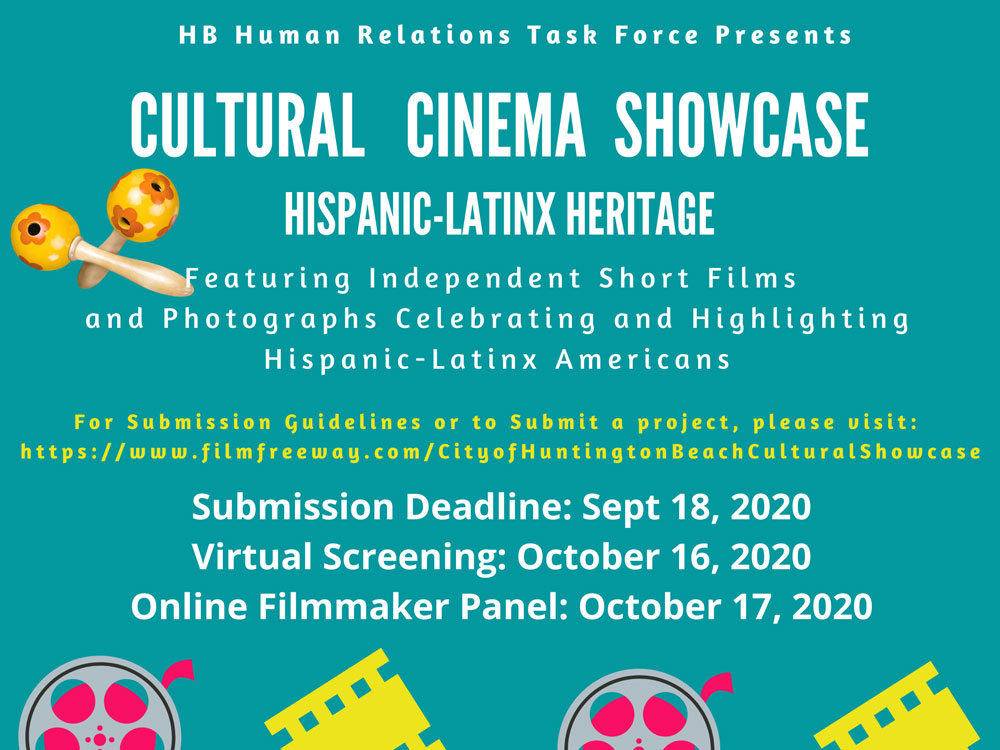 The HRTF meets monthly on the first Tuesday at 6:45 p.m. at the Central Library - 7111 Talbert Avenue.  During the COVID-19 pandemic, meetings are held via Zoom.

The Huntington Beach Human Relations Task Force (HRTF) promotes and celebrates diversity in our community through education and understanding.

The Huntington Beach community-wide effort to promote human dignity is an important element in building a better community. Today, the HRTF works closely with the Police Department to strictly enforce and monitor all incidents that could be classified as hate crimes. Huntington Beach places a high priority on investigating and reporting these types of crimes immediately to the Orange County District Attorney’s Office and the Orange County Human Relations Commission. The HRTF discusses preventative actions and develops programs to encourage community education, interaction and relationship building.

TRACKING
The HRTF works with the Huntington Beach Police Department (HBPD) to review and follow up on reported hate incidents and hate crimes within the City of Huntington Beach. The HRTF reviews reports by the HBPD on incident and crime investigation, and tracks the progress of hate crimes filed by the HBPD with the Orange County District Attorney’s office.

SCHOOL PROGRAMS
Over the years, the HRTF has worked in partnership with Orange County Human Relations to develop programs at local high schools. Programs have ranged from working with individual students to implementing school wide diversity and educational training programs. Historically, the HRTF has also sponsored student field trips to the Museum of Tolerance in Los Angeles, California.

Currently, the HRTF hosts an annual District-Wide Student Day of Dialogue for students and their advisors from all local high schools within the Huntington Beach Union High School District. The day is facilitated by Orange County Human Relations and includes activities, discussion groups, and planning activities. Students spend the day sharing current human relations issues on their campuses, role-playing, and working together to develop a listing of activities to implement on their campus.

COMMUNITY DIVERSITY LEADERSHIP AWARD PROGRAM
In 2017, the HRTF kicked off its first Community Diversity Student Leadership Award Program. The purpose of the award program is to publicly recognize and award a student that performs a specific act that shows or demonstrates their commitment to promoting diversity at their school. The award program will continue into 2018 for both students and adults.

The 2017 awardee was Linda (Linn) Tang, who has served as president of the Huntington Beach High School Bridges program, and has participated and led several on-campus activities, including “What If Week,” “No Name Calling Week,” and Social Justice Week. Ms. Tang also participated in the Bridges Youth Leadership Camp and Ambassador Program offered by Orange County Human Relations. Ms. Tang’s achievements were honored at the May 17, 2017 City Council meeting.

ANTI-BULLYING RESEARCH and PROCLAMATION
At the request of the Huntington Beach City Council, the Human Relations Task Force completed a study on bullying, entitled Bullying: A Report from the Huntington Beach Human Relations Task Force (May 2012). The objective was to evaluate the findings and make a recommendation to the City Council as to whether an ordinance was needed to address the issue specifically. After careful consideration of all of the factors involved, the HRTF concluded that a specific anti-bullying ordinance was not needed. However, the task force identified a number of interventions related to bullying, including the adoption of a citywide proclamation.

On October 15, 2012, in celebration of National Bullying Prevention month, the City Council signed a Proclamation Against Bullying proclaiming its ongoing commitment to address bullying in all its forms and encourage schools, students, parents, community organizations, and religious institutions to engage in a variety of awareness and prevention activities designed to make our community safer for all students and all citizens.

Donations for HRTF programs, made payable to the City of Huntington Beach, may be sent to:

In the event a member retires or is unable to complete his term, an appointment shall be made to fill the remainder of the unexpired term. The Human Relations Task Force currently has no vacancies.  Should one become available, please complete the Boards & Commission Application.


Huntington Beach has 75 parks and these parks have 754 acres!  You can find information about the City parks by viewing our City Parks Locator.