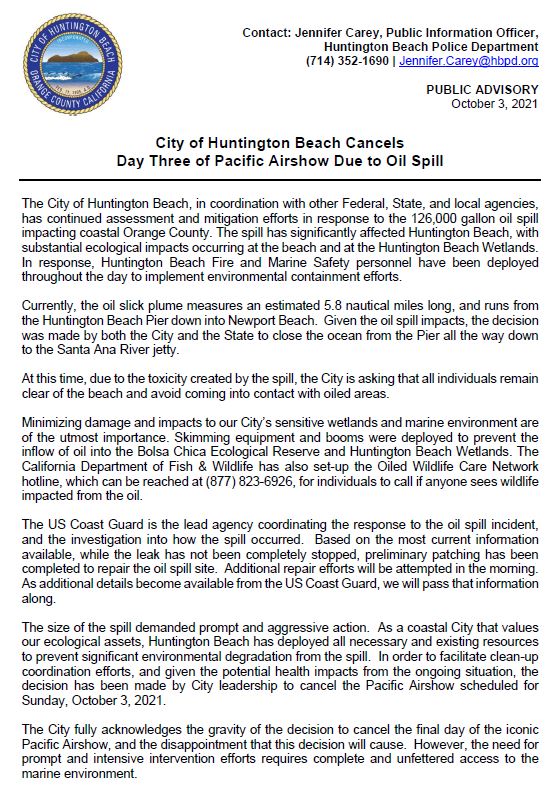 The City of Huntington Beach, in coordination with other Federal, State, and local agencies, has continued assessment and mitigation efforts in response to the 126,000 gallon oil spill impacting coastal Orange County. The spill has significantly affected Huntington Beach, with substantial ecological impacts occurring at the beach and at the Huntington Beach Wetlands. In response, Huntington Beach Fire and Marine Safety personnel have been deployed throughout the day to implement environmental containment efforts.

Currently, the oil slick plume measures an estimated 5.8 nautical miles long, and runs from the Huntington Beach Pier down into Newport Beach. Given the oil spill impacts, the decision was made by both the City and the State to close the ocean from the Pier all the way down to the Santa Ana River jetty.

At this time, due to the toxicity created by the spill, the City is asking that all individuals remain clear of the beach and avoid coming into contact with oiled areas.

Minimizing damage and impacts to our City’s sensitive wetlands and marine environment are of the utmost importance. Skimming equipment and booms were deployed to prevent the inflow of oil into the Bolsa Chica Ecological Reserve and Huntington Beach Wetlands. The California Department of Fish & Wildlife has also set-up the Oiled Wildlife Care Network hotline, which can be reached at (877) 823-6926, for individuals to call if anyone sees wildlife impacted from the oil.

The US Coast Guard is the lead agency coordinating the response to the oil spill incident, and the investigation into how the spill occurred. Based on the most current information available, while the leak has not been completely stopped, preliminary patching has been completed to repair the oil spill site. Additional repair efforts will be attempted in the morning. As additional details become available from the US Coast Guard, we will pass that information along.

The size of the spill demanded prompt and aggressive action. As a coastal City that values our ecological assets, Huntington Beach has deployed all necessary and existing resources to prevent significant environmental degradation from the spill. In order to facilitate clean-up coordination efforts, and given the potential health impacts from the ongoing situation, the decision has been made by City leadership to cancel the Pacific Airshow scheduled for Sunday, October 3, 2021.

The City fully acknowledges the gravity of the decision to cancel the final day of the iconic Pacific Airshow, and the disappointment that this decision will cause. However, the need for prompt and intensive intervention efforts requires complete and unfettered access to the marine environment.


Huntington Beach has 75 parks and these parks have 754 acres!  You can find information about the City parks by viewing our City Parks Locator.