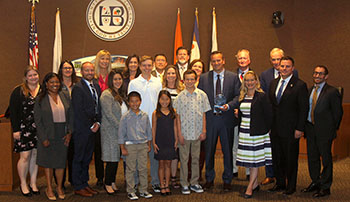 Brian Williams serves as Senior Trial Counsel making him responsible for handling and overseeing all Civil lawsuits brought against, and on behalf of, the City. Prior to joining the City, Mr. Williams was a Shareholder at Sullivan Ballog & Williams, LLP. Throughout his entire career, Mr. Williams has focused on the defense of lawsuits involving Catastrophic Injury, Wrongful Death, Police Practices, and Employment Litigation. He was previously designated as Regional Trial Counsel by several insurance companies, and has thus handled trials throughout the State of California, in both State and Federal Courts.

With Brian’s experience with the City Attorney’s Office, since he joined in February of 2017, he has brought a high level of trial experience, having tried over 30 high-dollar-amount jury trials in Superior and Federal Courts.  He has extensive experience working to defend law enforcement, both the Orange County Sheriff’s Department and now the Huntington Beach Police Department.  He adds to the City Attorney’s take-it-to-trial approach to lawsuits, which has been exceedingly successful and has saved the City millions of dollars just in the past couple of years.

Mr. Williams is a member and active participant in many professional organizations, including the Federal of Defense and Corporate Counsel, the Association of Southern California Defense Counsel, and the Orange County Bar Association. He has participated as an invited speaker in the areas of trial practice and litigation handling at various attorney gatherings and continuing education seminars. He is admitted to practice law in California, as well as before the United States District Court and the Ninth Circuit Court of Appeals.