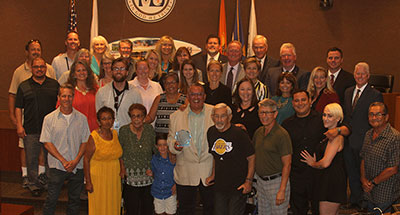 In 1990, Randy wanted to work with artists on community wide projects and started a job with the City of Huntington Beach as a cultural affairs assistant. The goal was to open up the Huntington Beach Art Center, which eventually opened in 1995. Before the Art Center opened, Randy worked with the Sister City program and worked on “The Walls,” a public art program for aerosol artists on the City’s beach walls.

During his years at the Art Center, he helped to program film festivals and coordinate fundraising opportunities, including the GTE Summer Classic Equestrian event and the Center’s Masked Ball. Four years later, he was curator of the music festivals held at the City’s Pier Plaza.

When an opening came up at the Rodgers Senior Center in Huntington Beach, Randy new it was time to get back to his roots in Human Services. In 2002, Randy helped to bring together Rodgers Seniors Center and Senior Outreach to create HB Senior Services, which set up the foundation for the Senior Center in Central Park.

In 2014, as plans for the Center began to solidify, Randy helped to raise almost four million dollars through unique partnerships with groups such as Hoag, Orange Coast Memorial, and many others. This funding was integral to the building of the Senior Center in Central Park, and to ongoing programs and services. Working with the Board of Directors of the Huntington Beach Council on Aging for almost 20 years, Randy spearheaded the Visionaries campaign and opening Gala for the Center.

Randy has always encouraged his staff to utilize their creativity, to always think outside the box. As a result, the Senior Services team has created one of the most dynamic senior centers in the nation. The Center has an average daily attendance of over 500, and continues to assist a new generation in Huntington Beach to age in community, from transportation to brain fitness, from baby boomers to centenarians, the center offers programs and services that make Huntington Beach a great place to age.

We thank Randy for his continued service and dedication to the residents of Huntington Beach.