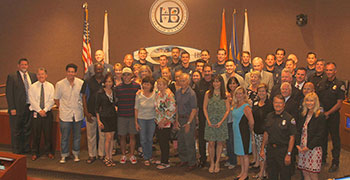 Congratulations to HBFD Battalion Chief Mark Daggett, the recipient of the Fire Department’s selection for the Mayor’s Award.

Mark joined the Department in 1993, coming to the City from the City of Vernon Fire Department. Since that time he has progressed through the ranks of Firefighter Paramedic, Fire Captain, and Deputy Fire Marshal.  He now serves as our most veteran Fire Battalion Chief, as commander of one of the three shifts who oversees the 40 fire safety personnel at the eight fire stations.

In addition to serving as a member of the Fire Department’s command staff, Mark’s additional responsibilities include managing the homeland security grants; administering the program for the department’s radios and pagers; serving on the emergency apparatus committee; and conducting internal investigations. A critical and time consuming task that Mark performs is overseeing the background process for all of the fire department’s new hires and volunteers. The Department processes approximately 2,000 applications per year, and his involvement helps us to select the most qualified candidates for our department.

Mark lives in Laguna Niguel with his wife Susan, and has three children: Jeffrey, Lauren and Kyle and a dog Bruin, who is named after Mark’s alma mater mascot, UCLA.

Mark and Susan are great representatives of the Department and the fire service. It is a privilege to present the Mayor’s Award to Battalion Chief Mark Daggett, with a special notation for Sparky.