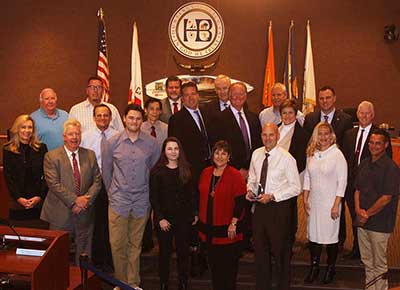 Bob Stachelski has been at the City of Huntington Beach for 17 years.  He was originally hired in 2000 as an associate Traffic Engineer and was shortly promoted to Transportation Manager. Bob’s position, as well has his attitude for his work at the city of Huntington Beach, has him working with many departments within the City.

Bob has a key role in reviewing larger new developments in the City and he works hand in hand with the Development Services Department, Public Works Development staff, Fire Department and Police Department on all the large developments in the city.  He has reviewed many projects including Bella Terra, the Strand (now called 5th and PCH), many specific plans, Circulation Element and General Plan update, Parkside, Brighwater,  Sunset Beach Annexation, city concerns of the banning crossing of the Santa Ana River, as well as many, many more.

He works directly with the Police Department to help handle traffic concerns in all areas of the City.  In this area he is active in pursuing grants for traffic upgrades for the City.  He and his staff have been instrumental in obtaining over $15 million for traffic safety grants over his career with the city.  These improvements include upgraded traffic signal improvements, signal synchronization, and connecting the system with fiber for communications.  He was also a key staff on the purchase of 11,000 street lights and the retrofitting program that will provide the city cost savings over the next 20 years.

We thank Bob for his commitment to the city and the residents of Huntington Beach.