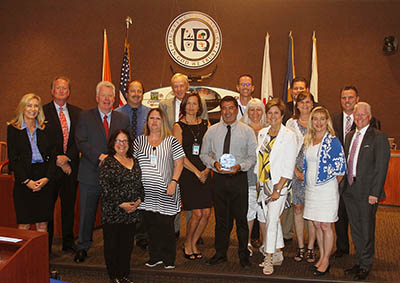 On Monday, June 19, Dave Dominguez received the Mayor’s Award for his years of dedicated service to the City of Huntington Beach and to the Community Services Department.

Dave began his career serving with the Community Services Department at Oak View Community Center, where he excelled in the areas of Recreation Programming and Supervision.  After several years serving on the City TEAM, Dave took a short hiatus to move to Japan to teach English to Japanese businesspeople.

But the City of Huntington Beach could not survive for long without Dave!  Upon his return stateside, he quickly became re-employed with the City of Huntington Beach, this time at the City Gym and Pool.  Shortly thereafter, Dave began working in a new position, where his intelligence and energy were focused in the area of Park Development, and also in Facilities and Concession Management.   Under his leadership, the department manages the permits for use in over 70 City Parks and more than a dozen concessions, creating quality of life for residents and visitors in our community.

Dave’s expertise and focused attention to detail in the area of park and facilities development has made him the “indispensible man” on a variety of development projects.  Working with several of our city departments, he has taken dozens of highly visible projects through the entitlement process, up to and through the construction phase.  Early on, the CS team included Ron Hagan and Jim Engle and the projects they worked on virtually changed the complexion of the beachfront from Beach Blvd to Main Street.

More recently, as a result of the drastic staffing reductions made nearly a decade ago, Dave has worked on the entitlement process almost singlehandedly.  Some notable projects that Dave has taken the lead on are as follows:
• Senior Center in Central Park
• Bartlett Park
• Worthy Park
• Central Park Sports Complex (Team Room Project)
• City of HB City-wide Park and Recreation Master Plan

This minimal sampling of Dave’s work duties not only illustrates his value to the Community Services Department but speak of his value to the community overall.  The work that Dave does, particularly in the area of Park Development, creates a legacy for generations to come. Yes, Parks Make Life Better!