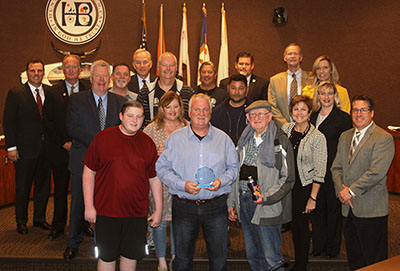 Greg Wells was hired into the Utilities Division Production Section in 2006 as a Water Systems Technician I.  Greg has been promoted twice and is now serving as a Water Systems Technician III since 2009.  Greg has proven to be nothing less than an exemplary employee.  His professional background revolved around the electronics and electrical service industry.  Fundamentally, Greg possesses a highly technical skill-set related to electronics.

A little over a year ago, Greg was approached with a project consisting of building an “emergency operation” engine control system for use at each of the City’s 15 flood control pump stations.  Historically, a controller executing these functions built by an outside source would cost approximately $17,000 each.  The flood control pump station infrastructure requires 49 of these controllers ($833,000 total cost).

By taking on this project and overcoming each of the following challenges, Greg has been able to assemble a fully functional control system at an approximate cost of $9,000 for each of the 49 pumping units ($440,000 total cost).  This will save the City an estimated $390,000 once the project is fully commissioned. We thank and congratulate Greg for his efforts and wish him continued success!


Working on your car and need to get rid of the used motor oil?  Protect the environment and dispose of it in the right way - for free! - by using one of these options.