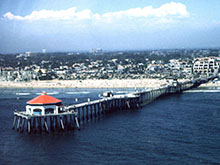 Huntington Beach is a seaside city within Orange County in Southern California.  It is bordered by the Pacific Ocean on the west, and has been long known for its long 8.5 miles of beautiful beach, mild climate, and excellent surfing, earning it the nickname of Surf City.  Surf, sand, sun and subtle sophistication encapsulate what the City of Huntington Beach is all about.

The California lifestyle is synonymous with Huntington Beach.  Dean Torrence, from the 1960’s pop group Jan and Dean, who co-authored the famous number one hit “Surf City,” said that Huntington Beach embodies the song’s spirit of freedom and California fun.  The city is also mentioned in the Beach Boys song “Surfin’ Safari” and in “Surfer Joe” by the Surfaris. Ocean swells, endless sunshine and a fleet of bobbing longboards have played an instrumental role in earning the city its well-deserved “Surf City” nickname.  Nothing epitomizes the California surf culture more than HB.  Boasting some of California’s widest, cleanest, and safest beaches, the unofficial dress code has become a mix of wetsuits, bikinis and sandals accessorized by volleyballs, surf boards and beach towels.

Named the "Best City to Live in Orange County" by the Orange County Register readers, Huntington Beach offers residents a charming community with ideal weather, a diversified economy overflowing with good jobs, a wide variety of housing, an excellent educational system, boat marinas, numerous parks, and exemplary health care. The City of Huntington Beach is located along the Southern California coast in Orange County, 35 miles south of Los Angeles and 90 miles north of San Diego. Named for railroad magnate Henry Huntington who orchestrated its development, the city is now an epicenter of activity and entertainment with wide, sandy beaches.


The city has over 1,000 parking spaces near the beach!  You can purchase the Annual Beach Parking pass that allows discounted parking prices near the City beach.  Learn more about this beach parking pass.